13,835 crimes were committed by those with a previous conviction or caution for animal cruelty offences

This report from the Centre for Crime Prevention reveals that those convicted of cruelty to animals in recent years had in the vast majority of cases already been convicted of other offences. They went on to commit thousands of crimes, including robbery, theft, the rape and neglect of children, and murder.

Despite the seriousness of animal cruelty offences and the evidence of strong links to other crimes, serious penalties are vanishingly rare, with more than 92% of those found guilty avoiding prison.

Among those given a fine or a suspended sentence rather than prison were criminals who starved a dog to death, strangled a cat and threw it in the bin, filmed themselves throwing a bulldog down the stairs so many times that she had to be put down, beat a cat to death, set a puppy on fire, chained an elephant to the floor and beat her, starved a snake to death, organised caged dog fights, swallowed a live goldfish, put a cat in a tumble dryer, killed a rabbit and took the body to bed, decapitated snakes to eat their heads, and lured a Richmond Park duck with bread and then snapped its neck in full view of horrified passers-by.

Click here to read the report, including a full regional breakdown and examples of soft sentencing for animal cruelty

Please donate to our campaign for tougher sentencing for animal cruelty. If we raise £2,000 we will send a copy of our report to all MPs, to help get the law changed.

This report by Peter Cuthbertson and David Spencer of the Centre for Crime Prevention reveals:

Those guilty of animal cruelty go on to commit a huge number of other offences
In the decade ending in 2015, 13,835 offences were committed by those with a previous conviction or caution for animal cruelty offences. This includes:

Prison is very rare – and other punishments are getting more lenient
Since 2005, 12 in every 13 people convicted or cautioned for cruelty to animals avoided prison. Of the 13,862 criminals convicted or cautioned, only 1,063 (7.7%) received a prison sentence. Fewer than 3% of women convicted of animal cruelty went to prison, compared to 11% of men. 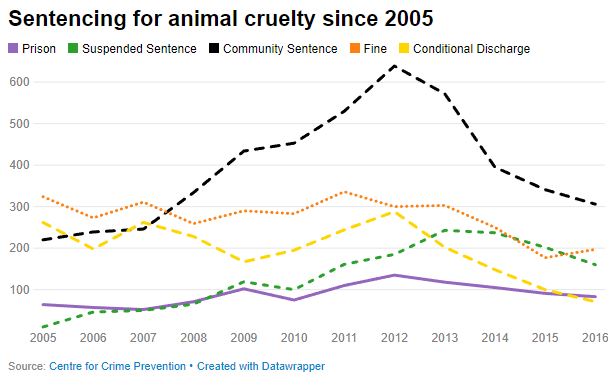 Regional variation
The proportion of animal cruelty cases resulting in a prison sentence varies greatly by criminal justice area, from 28% in Cumbria to under 2% in Surrey. By contrast, 47% of animal cruelty cases in Surrey resulted in a community sentence, and 26% in a fine. See the Appendix for full breakdowns by area for conditional discharges, fines, community sentences, suspended sentences and prison. 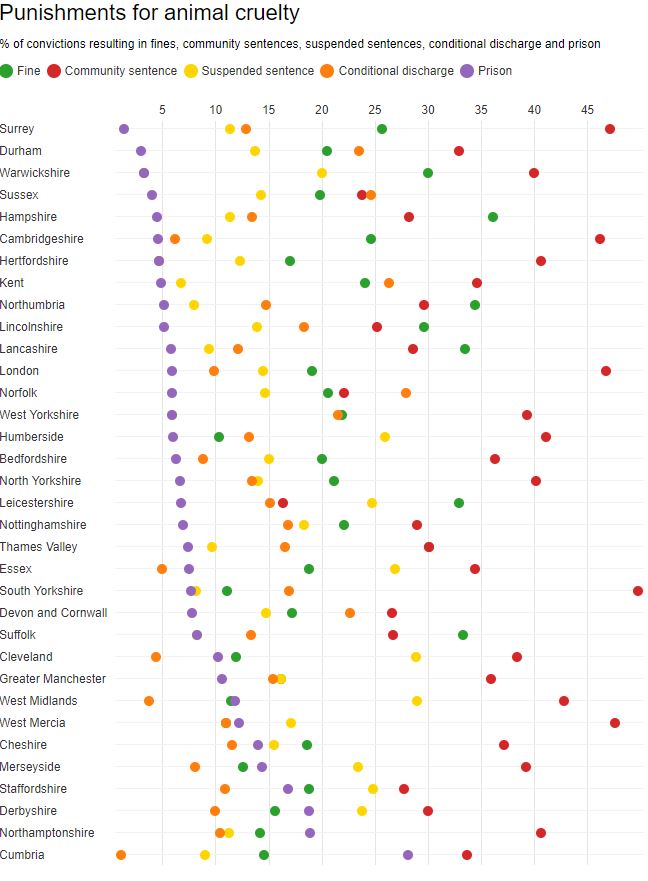 Peter Cuthbertson, Director of the Centre for Crime Prevention, said:

“Animal lovers will be horrified to learn that animal cruelty is one of the many offences treated extremely leniently by our courts.

“The government is currently exploring tougher sentences for animal cruelty. This is absolutely necessary. We need more serious, prolific criminals in prison. This would protect people and animals alike, because it’s so often the same criminals who are a threat to both people and animals.”

Ranil Jayawardena, the MP for North East Hampshire, who contributed to the report, added:

“Deliberately causing pain, suffering or death to pets is wholly abhorrent. The problem is that bad people are still getting away with it. I am shocked at the number of animal abuse offenders who are either repeat offenders, or who have been convicted of other, often violent, offences. It is staggering. These are not only bad people, they are very dangerous. We must do more.”